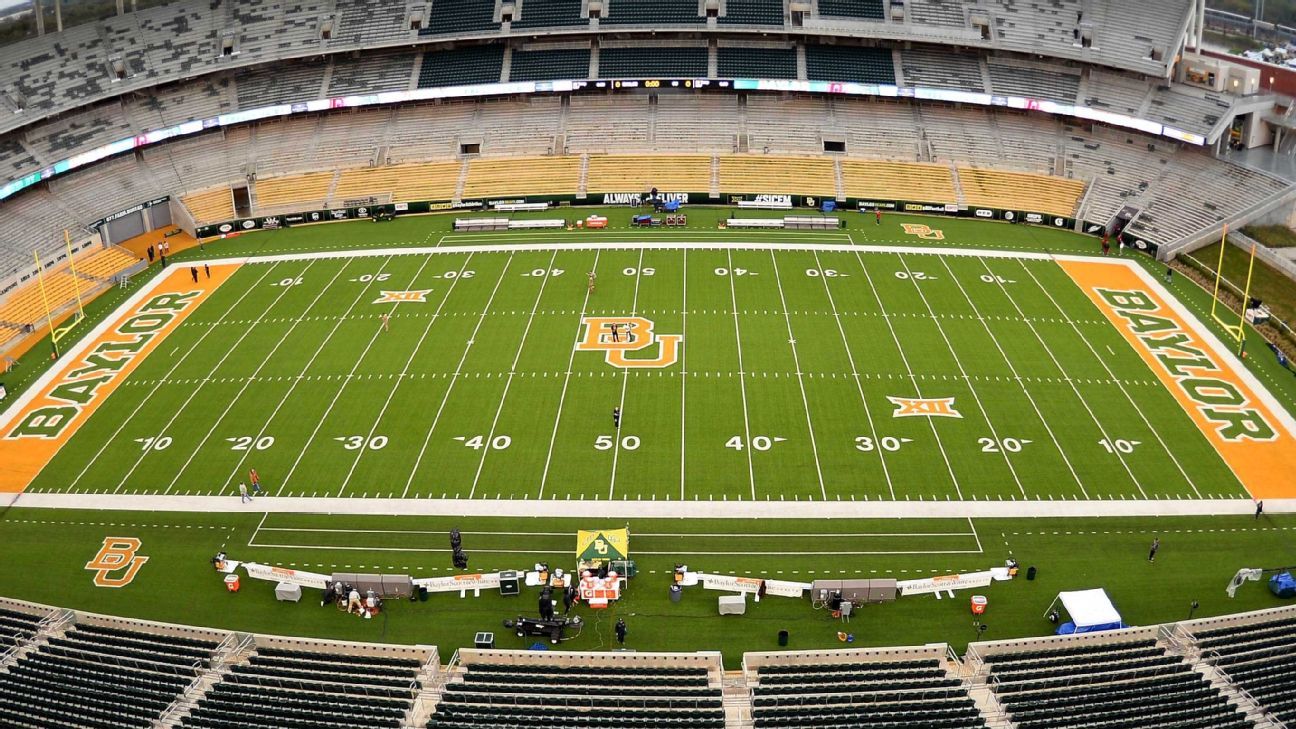 Baylor athletic director Mack Rhoades said there are 28 active cases of COVID-19 among its football players and 14 active cases among football staff members which led to the decision to postpone its scheduled game against No. 7 Oklahoma State.

The athletic department has 32 total COVID-19 cases among athletes, the school announced on Monday; four of those are outside of the football team. The school said 29 of the 32 positives are symptomatic, only three are asymptomatic.

Rhoades, in an interview with SicEm365 Radio in Waco, Texas, on Monday, said he believes that the outbreak is linked to the Bears’ Oct. 3 road trip to West Virginia. Baylor officials haven’t figured out the exact source of the outbreak but currently believe a false negative test that allowed an infected individual to travel to that game caused the issues.

“We feel pretty confident that we had a false negative; that somebody was on the plane that was really infectious, carrying the disease at some point in time,” Rhoades said.

Rhoades said they’re not certain how many infectious individuals traveled but the “percentages say that it was probably one or two.” The false negative test was likely an antigen test, Rhoades said, which most teams take the day before games because of the rapid nature of results as opposed to PCR tests, which take longer to process results. The Center for Disease Control says that the sensitivity of rapid antigen tests is generally lower than that of PCR tests.

Baylor, in accordance with Big 12 guidelines, tests athletes and staff members three times per week. Two of those tests are PCR, Rhoades said, and the third test, prior to games, is an antigen test.

Rhoades said his team was “really spaced out well” on the team flight and bus rides and was compliant in wearing masks and goggles in transit. He speculated that spread could have occurred during team dinner the night before the Oct. 3 game or in the visiting locker room at West Virginia’s Milan Puskar Stadium, citing “very cramped quarters.” Most visiting college football locker rooms are smaller than the home team locker rooms.

“That’s where we’ve narrowed it down to,” Rhoades said. ‘We think that’s the likelihood of how this started.”

Baylor paused all football activities on Thursday after receiving results from Wednesday’s testing of its team. The Big 12 announced on Sunday night that the Baylor-Oklahoma State game is postponed. It will be played Dec. 12.

This is the third game on Baylor’s schedule to be postponed this season. The Bears’ scheduled season opener against Louisiana Tech on Sept. 12 was postponed because of the Bulldogs’ COVID-19 testing results. The Bears’ hastily scheduled game with Houston for Sept. 19 was postponed a day before kickoff because the Bears were short of the league’s COVID-19 thresholds at a key position group.

Rhoades called the results “discouraging,” but they’ll examine what measures they can take on future road trips to further minimize risk.

“You feel like you’re doing everything you can to follow the rules and we certainly felt like we were going above and beyond,” Rhoades said. “For this to happen … it’s stressful and discouraging. But it’s become a way of life and that’s the reality of it.

“The unpredictability of it, knowing that you can have a perfect plan and execute it at a high level and still be susceptible to it …. you don’t have the control that you would like. You’ve got to stay positive and stay flexible, thoughtful and smart. So we’ll deal with it.”