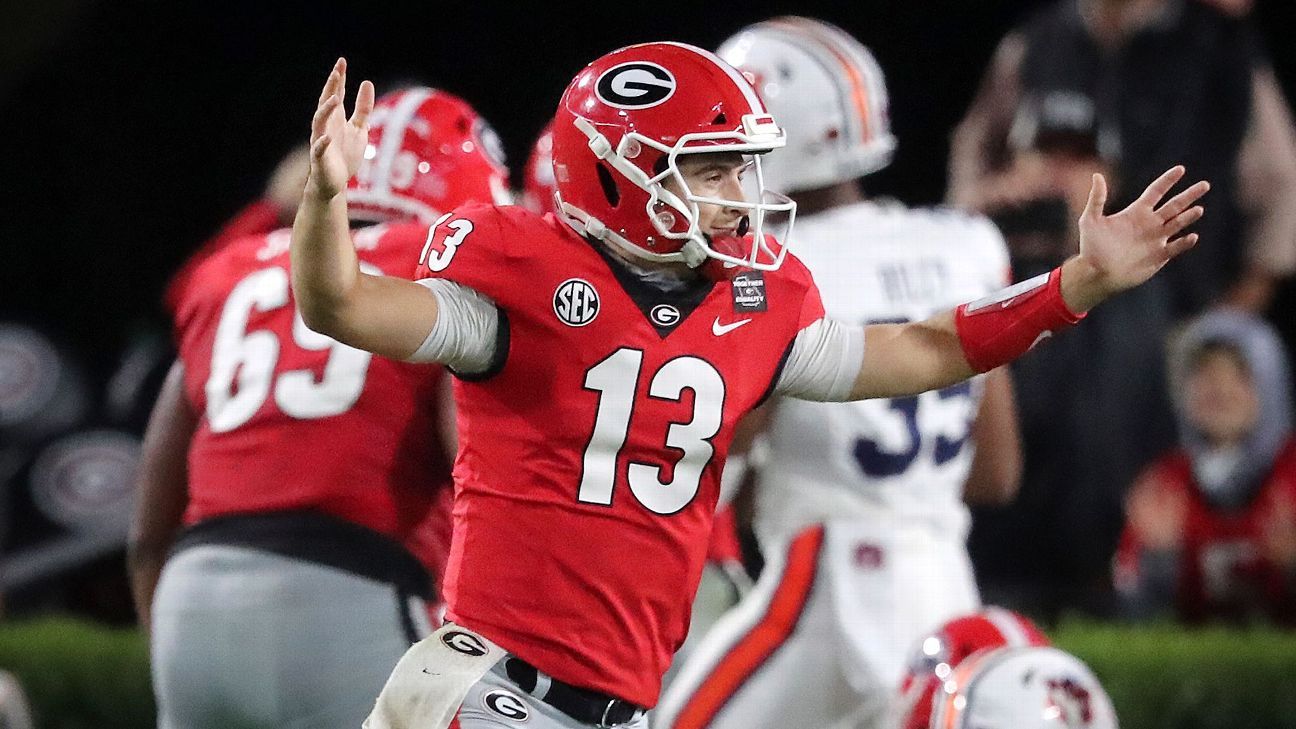 BLACKSHEAR, Ga. — When Stetson Bennett III moved his family from suburban Atlanta to southeast Georgia in the summer of 2004, he took his eldest son and namesake to see the small town’s high school football stadium while they waited for moving trucks to arrive.

“Yeah, but they’ll have to make it bigger when you get here,” his father told him.

Stetson Bennett IV was in the first grade.

While the stage might have seemed small in Brantley County back then, Bennett IV couldn’t ask for a bigger one on Saturday night. He has unexpectedly become Georgia’s starting quarterback and will lead the No. 3 Bulldogs in a nationally televised game at No. 2 Alabama.

“No, I don’t think it could get any bigger until Dec. 19,” Bennett IV said, referring to the scheduled date for the SEC championship game in Atlanta. “It’s going to be pretty big Saturday.”

Bennett IV’s circuitous route from lightly recruited high school prospect to preferred walk-on to junior college and then back to Georgia occurred because most college coaches believed he was too small to succeed at the FBS level.

Despite leading Pierce County High School to three consecutive state playoff appearances and throwing for 3,724 yards, running for 500 and scoring 40 total touchdowns as a senior, his only FBS scholarship offer came from Middle Tennessee State. FCS programs such as Mercer, Samford, Harvard and Princeton wanted him, but FBS coaches thought he was too short and too light (he was 5-foot-11 and 185 pounds at the time).

“When you grow up in a little small town in Georgia, it’s hard to be seen,” his father said. “Even when you are, it’s easy to be discounted.”

Bennett III did everything in his control to make sure his son had a chance at following his dream to play big-time college football. While his new pharmacy was being built in Nahunta, Georgia, which is about 80 miles northwest of Jacksonville, Florida, he leveled an adjoining lot for a football field.

The field was only 80 yards long; one of the end zones would have been in the middle of Highway 82 if it were the full 100 yards. Orange construction fences prevented footballs (and players) from bounding into traffic.

Bennett III purchased two 53-foot shipping containers, cut off one side of each, and had them welded together. The “Hideout” sat behind his pharmacy, and it’s where Bennett IV and his Brantley Bandits teammates gathered nearly every day.

“I walked the halls of the elementary school recruiting kids to play,” his father said. “It didn’t matter if he was 30 pounds or 80, I told him he looked like he was going to be a football player.”

After school, the players gathered at the Hideout for snacks of peanut butter and jelly sandwiches and milk, a 15-minute devotional, tutoring and homework, and then a workout and practice. There were shelves for the players to hang their equipment, along with two referee shirts and a pair of whistles.

Bennett III and other coaches lined the field with 10-yard lines and hash marks. One thing missing: a chain gang. If a kickoff was returned to the 32-yard line, the possession started at the 30-yard line. If the next pass went 14 yards, it was backed up to the 40. The local rules often left opponents scratching their heads.

During game week, Bennett III hung a banner promoting the game from his pharmacy, and it wasn’t unusual for 100 people or so to show up.

During Bennett IV’s seventh-grade season in 2010, the Brantley Bandits played a 34-game schedule, including three games in one day. They finished 32-2.

“Gosh, that would be crazy to do now,” Bennett IV said. “We traveled all over the place.”

As an eighth-grader, Bennett IV sat in the Pierce County High School team’s quarterback meetings and broke down film with head coach Sean Pender. That same season, after he threw for 455 yards against a rival school’s JV team, the varsity coach told his dad, “That boy is for real. I’ve never seen a performance like that. He can throw it in a mailbox.”

The legend of the “Mailman” was born. A year or two later, a Pierce County High teammate, whose father was mayor of a nearby town, gave Bennett IV a U.S. Postal Service hat.

“We started calling him the Mailman,” said Kole Kicklighter, one of his teammates in high school. “He liked it and everybody else liked it, so it stuck.”

Bennett IV wore the blue Postal Service hat in an attempt to stand out at 7-on-7 tournaments and college camps.

“Sometimes I just didn’t really understand it because I was like, ‘Well, I’m pretty sure I’m better than these guys, and I think I’m smarter than them and faster than them,'” Bennett IV said. “I really didn’t know what was going on. I guess you just get used to it and then just say, ‘Well, you’ve just got to show them sometimes.'”

Pender, who played for Hal Mumme at Valdosta State, said height was the only reason his quarterback wasn’t more heavily recruited.

“He was always smaller, maybe 5 feet, 9 inches as a sophomore,” Pender said. “He had a live arm and was fast, witty and had a gunslinger’s mentality. He wouldn’t dwell on mistakes and moved on. He just has that knack. You can tell some kids have that ‘it’ factor. He has it.”

His father and mother, Denise, both attended Georgia, and he grew up attending Bulldogs games. UGA’s coaches didn’t seem interested, either.

“Davis Mills might be the best quarterback in the country,” LeCounte told Smart, according to Stetson Bennett III, “but he’s only second best in Class AAA. I’ve played against both, and Stetson Bennett is better.”

Bennett joined the Bulldogs as a preferred walk-on and ran the scout-team offense while redshirting in 2017. He drew praise from Georgia’s defense after mimicking Heisman Trophy winner Baker Mayfield in preparation for playing Oklahoma in a CFP semifinal at the Rose Bowl.

“Stetson Bennett is a beast, man,” then-defensive coordinator Mel Tucker said at the time. “He puts a lot of pressure on our defense because he is extremely quick, he’s fast and he can throw. He can throw in the pocket and he can throw on the run and he’s very, very competitive.”

Yet, when Georgia signed highly regarded freshman Justin Fields to compete with returning starter Jake Fromm the next season, Bennett IV could see the writing on the wall. He transferred to Jones College in Ellisville, Mississippi, where he threw for 1,840 yards with 16 touchdowns in 2018.

Bennett IV was set to sign with Louisiana when Pender called him, shortly after Fields announced he was transferring to Ohio State.

“Would you go back to Georgia if they’ll have you?” Pender asked him.

“Yes,” Bennett IV said. “But it has to be different this time.”

“I think that’s what it was — just to have a chance this time to compete for the starting job,” Bennett IV said.

Pick the winner of 10 college football matchups each week. Play straight up or confidence. Make Your Picks

Bennett IV seemed like the odd man out once again. In fact, a couple of weeks before the start of preseason camp in August, new offensive coordinator Todd Monken told him as much.

“It was frustrating, but I just kept my head down and kept working and trying to prove them wrong,” Bennett IV said. “I wanted to make sure whenever my number was called, I would be ready to go.”

On Sept. 2, Newman announced that he was opting out of the season because of concerns about the coronavirus. Daniels, who had missed all but one game at USC last season because of a knee injury, still hadn’t been medically cleared to play. Bennett IV and redshirt freshman D’Wan Mathis were left to compete for the starting job.

The Bulldogs went with Mathis in the Sept. 26 opener at Arkansas, but he looked overwhelmed while completing 8 of 17 passes for 55 yards with one interception. Bennett IV came off the bench and threw for 211 yards and two touchdowns on 20-for-29 passing, leading Georgia to a 37-10 win.

“Stetson is confident. He’s confident in himself, and he’s a competitor,” offensive lineman Jamaree Salyer said. “Stets goes out there and gives it everything he’s got every day. He doesn’t like to lose. You can just see that on the job when he came in at Arkansas.”

Bennett IV threw for 240 yards with one score in a 27-6 victory over then-No. 7 Auburn the next week, and then had 238 passing yards with three total touchdowns in a 44-21 win over then-No. 14 Tennessee last week.

In three games, he is completing 63.1% of his attempts with five touchdowns and no interceptions. His Total QBR of 93.1 ranks third among FBS players, behind Ole Miss’ Matt Corral and Alabama’s Mac Jones.

“I honestly think he’s just himself,” Smart said. “He doesn’t try to be someone else. He doesn’t try to artificially lead or fake it. He never did that while he was trying to compete for the job and he hasn’t done it since he got the job. Stetson is who he is, and I think the skill players on offense, the offensive line, they all trust him and rally around him because they know he understands what we’re trying to do offensively and he can put them in good situations.”

On Saturday night, in a game that might very well impact the SEC championship and CFP races, Bennett IV will face his most difficult test on the biggest stage yet.

It will be a long way from that tiny football stadium in southeast Georgia.