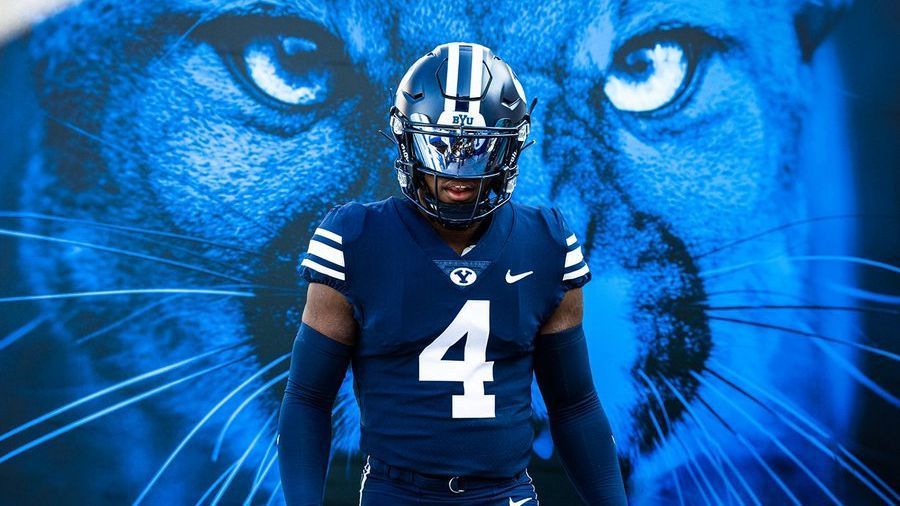 We’re already in Week 6 of the college football season, and it has been high-octane energy all year long. There have been upsets, blowouts, trolls — you name it. Expect more of the same heading into a huge week on the college gridiron.

There are some great games on tap — and some of them feature fantastic uniform combinations. Some squads will honor their school’s history, while others recognize some important causes off the field with their gameday gear. One of the best uniform matchups of the weekend belongs to East Carolina vs. UCF — and you’ll see why soon.

Nothing beats a quality throwback uniform, and the No. 20 Florida Gators receive an A+ for their fit this week. For their homecoming game against Vanderbilt, they will honor the Gators teams from the 1960s and 70s. The jersey is a soft blue color, with white and orange stripes along the shoulders. The numbers are white and appear on the front and the side of the shoulder.

White pants with orange and blue stripes provide some pop, and the helmet brings everything together. It’s solid orange with the vintage Florida logo on both sides. However, there is no stripe on this helmet. This is only the third time the Gators have worn a stripeless helmet since 1946. The other two times were in 2017, when they wore their Swamp green uniform, and in 2019, when they sported their Pro Combat threads, per Gator Uniform tracker.

Utah is again going back to its vintage concept, but with a new color. The Utes opted for a snowy white look this week, ensuring that the Utes’ history shines through in their wardrobe. Red is the accent color, and the old-school interlocking “U’s” are located on the shoulders and helmet. They’ve worn a red version of these throwbacks earlier this year, but this white rendition might be even better.

One team that has had impressive uniforms this year is the Troy Trojans, and they continue that trend with their Week 6 threads. They are rocking black jerseys highlighted with their traditional maroon as the supporting hue. Bright white pants give the attire contrast — but that’s not what makes this uniform throwback worthy. Their helmets will showcase the vintage TSU logo for the first time since 2003. TSU stands for Troy State University — the school’s name until they changed it to Troy in 2004.

For the first time since 2003, the Troy helmet will feature the TSU logo🔥

The Knights of UCF are dusting off the gold pants, for the first time since 2018, according to the team’s website. The team will also sport their black Pegasus jerseys, topped off with white helmets. The white/black/gold combo was their go-to uniform before they redesigned their wardrobe in 2016 — and there’s a particular reason why they are bringing back this look. UCF legend Blake Bortles is being inducted in the team Hall of Fame during the game, and he was perfect when he wore this uniform combo — a 7-0 record. With the Knights wearing their first tricolor combo since 2019, they hope they can make Bortles proud and win on Saturday.

A classic look for @UCF_Football this weekend vs. ECU ⚪️⚫️👑 pic.twitter.com/a5Btf5P2Ep

Keeping it simple isn’t always a bad thing — and No. 10 BYU proves that with its wardrobe for Week 6. Navy is the dominant color being used throughout the ensemble. There are hints of white used for the jersey number and used as stripes on the helmet and the shoulders. The color is smooth, yet sleek, giving the Cougars a cohesive and stylish look for their matchup against Boise State.

This season, Tulane made headlines when it revived its “Greenie” logo on its helmets, and had a very appealing monochromatic wardrobe this week. The team donned an all-baby-blue look for the game against Houston, which was pretty sharp. Green and white combine as accent colors, being used for the pant and shoulder stripes. “Greenie” isn’t on the helmet this week, but the Riptide symbol still looks excellent against the light-blue helmet.

The Tennessee Volunteers unveiled new threads for their game against South Carolina. The team has entered “dark mode,” utilizing black as the dominant color on their uniforms. Orange is the complementary hue, being used for the jersey number and decals. However, their helmets are still white and sport the traditional “T” logo. The white actually works pretty well with the Volunteers’ combination this week.

Missouri is celebrating its homecoming week with some great gear. The pants and jerseys are a sleek black, giving the Tigers a menacing look. Yellow is the secondary color, bringing some brightness to what is a pretty dark ensemble.

The helmet stands out for two reasons — one being that it is a bright and vibrant yellow. The other is that the logo isn’t the traditional Mizzou logo. Instead, a block “M” is plastered on the side. The “M” served as the primary logo for the school for nearly 40 years until it switched it to the Tiger emblem in 2012 — so Missouri is honoring its past this weekend against North Texas.

Having a white jersey is fine, but you better have the style and color coordination to make it work. The New Mexico State Aggies pulled out a new uniform combination for their matchup with Nevada. A crisp, white jersey is paired with red pants and a red helmet — with an interesting twist. The helmet design is minimalistic, with a plain logo on the right and the player’s number on the left. This is the first time the Aggies are showcasing these helmets since 2019, per Helmet History.

Breaking out a new combo for the national spotlight! #AggieUp | 🏈 pic.twitter.com/Fns0FoUEtP

East Carolina University‘s fit is another example of how white can look brilliant with a little matching. At the top, purple chrome helmets put the Pirates in contention for the best headgear of the week. The pirate logo is located on the right side of the helmet, and it also shows up on the shoulder of the white jerseys. The pants are purple, with a yellow stripe blazing the outer leg, and the school decal is on the right side. The Pirates’ colors benefit them, as they have a dynamic outfit for their date with UCF.

The Memphis Tigers took their uniform game up another level, showcasing a feline-themed fit for their game against Tulsa. A black helmet riddled with white tiger stripes kicks off the fire wardrobe — but it doesn’t stop there. White jerseys also have tiger stripes on the shoulder, but the the stripes are black and smaller than the ones on the helmet. Black pants complete this tiger-esque look, giving Memphis one of the better uniforms of the weekend.

Uniforms for a cause

The Nevada Wolf Pack are wearing outfits this week that support a great cause. They are sporting stylish silver chrome helmets with pink lettering that spells out “Pack.” The pink wording is in honor of Breast Cancer Awareness month, a special gesture by the team. The rest of the uniform is navy blue, with white being used as the trim.

The Northwest Missouri State Bears are honoring past and present military personnel this week for the school’s Military Appreciation Day. The school has close ties with the armed forces, having a program that allows students to become officers in Missouri’s National Guard.

The team is using its helmets to honor the 13 U.S. military members who were among those killed in the bombing at Kabul Airport in Afghanistan in August. Each player will have the name of one of the 13 service members on the bottom collar of the helmet with digital camouflage as the background. The headgear also features the school logo with the design of the American flag within it — called the “Flag Paw” by Tucker Peve, the team’s director of football equipment.

As an added touch, each player will have the obituary of the service member whose name is on their helmet taped in their locker before the game, Peve said in a phone interview.

This weekend is about something bigger than football. Thank you to all active and former military personnel, the countless sacrifices you’ve made for our freedom does not go unnoticed. 💚 pic.twitter.com/v7UmRYuNzc

This week we honor the 13 brave men & women that made the ultimate sacrifice during the attack on the Kabul, Afghanistan airport.

Each @NWBearcat_FB helmet will feature one soldiers name that gave everything defending our freedoms 🇺🇸 pic.twitter.com/VO0H7mU1CN

No. 22 Arizona State is recognizing Hispanic Heritage Month. The central stripe on the ASU helmet features designs inspired by Mayan patterns and glyphs. Some of the symbols displayed on the helmet are used in the Mayan calendar.