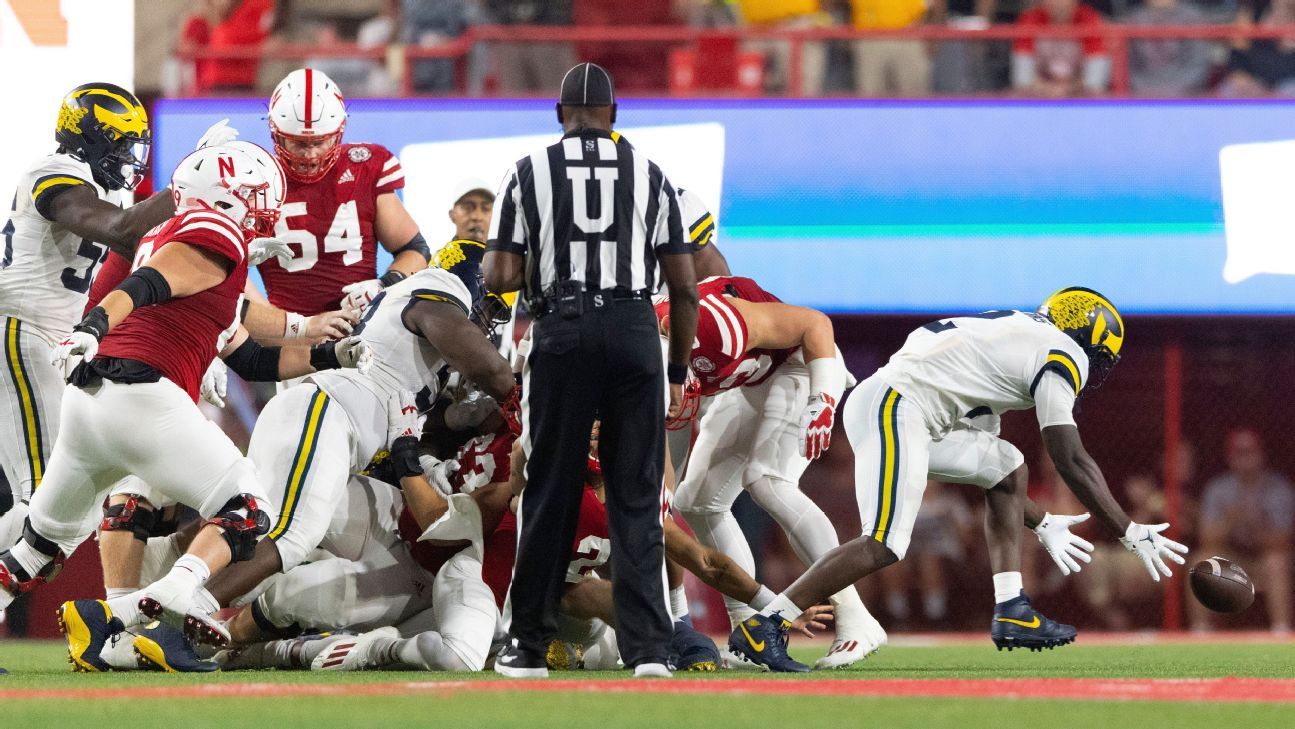 LINCOLN, Neb. — Michigan had not trailed at any point this season until Saturday night against Nebraska. With its undefeated season on the line, the Wolverines made the plays down the stretch to win.

Starting with defensive back Brad Hawkins.

With the score tied and less than two minutes remaining, Nebraska had the ball and the opportunity to drive for a winning score. Nebraska quarterback Adrian Martinez took the snap on third-and-1 and was stopped short. But Hawkins kept punching at the ball, prying it loose and causing a fumble.

Hawkins recovered, and Michigan kicker Jake Moody nailed a 39-yard field goal to keep the Wolverines undefeated with a 32-29 victory in a raucous environment Saturday night.

Michigan faced its first deficit of the season after allowing the Huskers to score 22 points in the third quarter. With the crowd almost willing the Huskers forward, Michigan found a way to respond.

“The atmosphere and the environment — it showed a lot of poise and moxie by our guys,” Michigan coach Jim Harbaugh said. “There’s no doubt they wanted to storm the field, tear down the goalposts, but not on our guys’ watch tonight. That was pretty cool.”

For Nebraska, it was the same old story — coming up agonizingly short in a game it felt it could win.

“I’m not going to stand up here and make excuses for myself,” Martinez said. “Can’t be careless with the football. I thought the play was over. I was standing as I’m standing right now, and I thought it was done. But regardless of that fact, I feel a lot of responsibility and can’t make plays that hurt our team.”

Nebraska coach Scott Frost did not want to discuss the officiating, saying only, “Adrian’s a warrior, and he’s an unbelievable player. I hurt for him. I don’t know if his momentum was stopped or not. We can’t expect to get those breaks. We’ve got to make them.”

Michigan made them when it needed to most.

After taking a 13-0 halftime lead, Michigan found itself trailing 22-19 heading into the fourth quarter. But Cade McNamara led a 10-play, 75-yard drive that served as an answer. Not to be outdone, Martinez directed an eight-play, 75-yard drive to give Nebraska the lead back.

The Wolverines tied it up on the next drive — thanks in large part to a highlight hurdle from Hassan Haskins on a 50-yard run. But when Nebraska got the ball back with 3 minutes remaining, the crowd stood on its feet.

Frost described it this way: “I think everybody thought we’re going to win this game. It wasn’t, ‘What’s going to go wrong?'” But in the end, it was Hawkins who made the crucial play to help determine the outcome.

“I knew they wouldn’t flinch,” Harbaugh said. “The toughness, the grit … that was a Clint Eastwood win, and we’re going to enjoy it.”