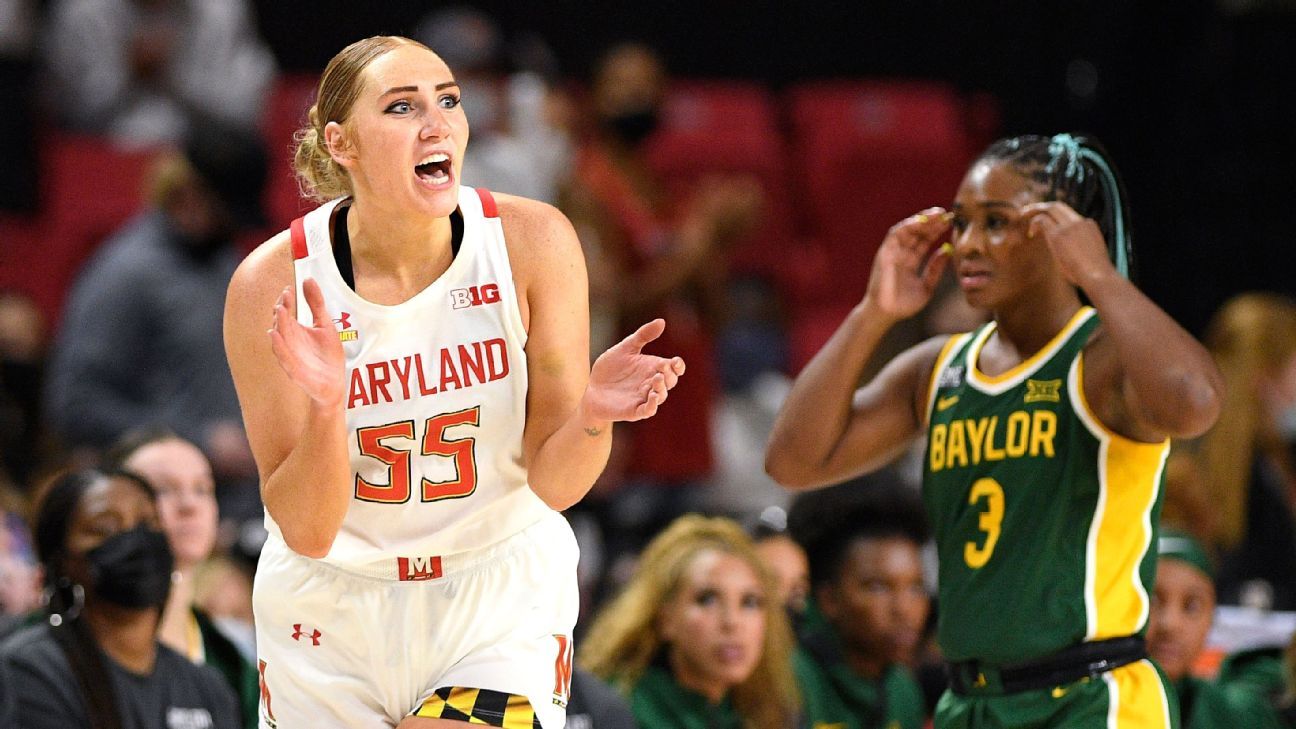 The big Monday showdown between No. 1 South Carolina and No. 2 UConn in the Battle 4 Atlantis championship game (noon ET, ESPN/ESPN App) will decide, for now, which is the top team in the country. But Maryland, sitting at third in the Associated Press Top 25 poll, might have something to say about that before the season is over.

Critics might point out that the Terps were outrebounded 43-39 and made 28 shots from the field to Baylor’s 33. But even if Maryland didn’t win the board battle, the Terps scored 17 second-chance points to Baylor’s seven, and they were 17-of-18 from the foul line, compared with Baylor’s 4-of-5.

Maryland also got good news with the return of junior guard Diamond Miller, who had been out with knee soreness. She didn’t score in a 4-minute outing against UNC Wilmington on Thursday, her first action of the season. But she had five points and four rebounds in 11 minutes against Baylor.

The Terps, who brought back almost their entire roster from last season, will find out more about themselves this week. At the Baha Mar Pink Flamingo tournament in the Bahamas, they’ll meet fellow top-10 teams NC State (Thursday) and Stanford (Saturday).

Sophomore wing Angel Reese has soared so far this season, averaging a double-double at 19.0 points and 11.5 rebounds, along with 2.8 steals. Reese is one of six Terps who are averaging double-figure scoring for a team that, like last season, will have one of the top offenses in the country. The Terps are averaging 91.8 PPG, while allowing 63.0.

Against the best opponents, can Maryland’s defense be good enough for a run at the Final Four or even the national championship? Yes, even though Baylor forward NaLyssa Smith had 30 points and guard Jordan Lewis 29 against the Terps. Getting Miller back to full speed will help.

We will know even more before Maryland — which last made the Final Four in 2015 and won its lone NCAA title in 2006 — travels to South Carolina for a Dec. 12 matchup on ESPN. Maryland is the Big Ten favorite again, but the conference currently has five ranked teams, so league play will sharpen the Terps, too.

The Lady Vols beat two ranked teams, No. 23 South Florida and No. 12 Texas, behind a combined 52 points, 24 rebounds and 7 assists from the junior guard. She is leading Tennessee in all three categories this season at 22.0 PPG, 11.7 RPG and 3.3 APG.

The Seawolves’ victory at Rutgers on Nov. 16 was the program’s third win over a team from a Power 5 conference. Stony Brook’s Ashley Langford is off to a 5-0 start in her first season as a head coach. The former Tulane standout previously had worked at Auburn, Old Dominion, Navy, Bucknell, Denver and, most recently, James Madison.

Harris, long known as a top assistant, is in her first season as a head coach after beginning her career in 1998. She spent last season at Texas, and her Power 5 conference experience before that was at Mississippi State, Texas A&M, Arkansas and NC State. Auburn got off to a rough start this season with losses to Georgia Southern and Old Dominion. Harris got her first victory Tuesday over Alabama State, and then got her first upset Sunday, winning at No. 18 Georgia Tech 59-51.

Look who is 4-0 despite the indefinite loss of their projected top player, Rae Burrell, to a knee injury in the opener. The Lady Vols have scored more than 60 points just once so far: in Sunday’s 74-70 overtime win over No. 12 Texas. But they showed great grit in that game, and the bottom line is that it doesn’t have to be pretty if you find a way to win — which Tennessee is doing without Burrell.

South Carolina got bad news on freshman guard Raven Johnson: The No. 2 overall recruit is out for the season with a knee injury. But depth at every position is one of the Gamecocks’ strengths, as they showed in their 80-63 victory over No. 9 Oregon on Sunday in the Bahamas.

UConn had a close 60-53 victory over former conference foe South Florida on Sunday in the Bahamas. So the Huskies will go into Monday’s tournament championship game with something to prove.

The Terps didn’t have 3-point specialist Katie Benzan against Baylor, as she was out with an illness. But freshman guard Shyanne Sellers started in Benzan’s place and continues to impress in her young career. She played all 40 minutes, getting seven points and five rebounds.

After losing their opener to South Carolina, the Wolfpack have won four in a row by an average of 33.8 points. Things get tougher again with the trip to the Bahamas. The Wolfpack got some inspiration from another team at their school Saturday when NC State won the women’s cross country national championship.

As they showed against Maryland, NaLyssa Smith (21.8 PPG, 12.0 RPG) and Jordan Lewis (15.8 PPG) are quite a duo for the Bears. Will they get enough consistently from the rest of their starters? Baylor under new coach Nicki Collen has averaged 24.3 3-point attempts thus far, compared to 10.7 per game last season.

The Hoosiers’ win over Kentucky on Nov. 14 helped propel them to No. 4, their highest ranking in program history. But their biggest test is coming up against the Cardinal. All five Indiana starters are averaging double-digit scoring, led by junior forward Mackenzie Holmes (18.0 PPG).

Sophomore guard Caitlin Clark had a triple-double with 16 points, 10 rebounds and 10 assists on Nov. 17 vs. Southern. But the Hawkeyes’ Sunday game against in-state rival Drake and their trip to this week’s Cancun Challenge in Mexico were canceled because of positive COVID-19 tests in the program. Iowa hopes to be in action again for a Dec. 2 game at Duke on ESPN.

The Wildcats clobbered Texas Southern 93-38 on Monday and then raised their 2021 Final Four banner. Then they took it to Marist 78-36 on Friday. Through four games, Arizona is allowing opponents an average of 44.3 points.

The Cardinal were upset by Texas last week. In Tuesday’s win over Portland, Haley Jones had the program’s first triple-double since Nicole Powell did it in 2002. Wednesday, an article by former Stanford player Mikaela Brewer alleging Stanford’s mental-health struggles last season was published. Sunday, Jones was listed as unavailable and didn’t play in a 66-62 win at Gonzaga. Coming up, the Cardinal have games on three consecutive days, two of them against top-five ranked teams. Suffice to say, it’s an interesting time for the defending champs.

Jordan Horston isn’t the only Lady Vol making noise. Junior center Tamari Key had a triple-double in Sunday’s win over Texas with 10 points, 18 rebounds and 10 blocked shots. She has been a defensive force for Tennessee, averaging 4.8 blocks.

The Cardinals have three victories since falling to Arizona in overtime in their opener on Nov. 12. But the offense is a bit of a concern: Louisville had scored 62 points or less in three of its four games.

A week after upsetting Stanford, the Longhorns were upset at Tennessee. But Texas’ tough scheduling should pay off down the line.

The Cyclones got dominant wins this past week over South Dakota State, in-state rival Drake and Southern. Ashley Joens (19.8 PPG) and Lexi Donarski (18.0) are leading the way.

The Wolverines beat Central Michigan 69-45 on Saturday without seniors Amy Dilk (injury), Leigha Brown (injury) and Naz Hillmon (illness). They especially need star forward Hillmon back for the tournament in Florida with the size they’ll face against the Beavers and Bulldogs.

The Seminoles haven’t been challenged yet, but that could come this week in St. Petersburg, Florida. BYU is 4-0, and then Florida State could face West Virginia, currently 3-0.

Guards Te-Hina Paopao and Endyia Rogers might be out at least until the start of Pac-12 play because of injuries. Forward Nyara Sabally remains a game-to-game decision due to injury. It’s a major difference when she’s able to play. She had 30 points and 11 rebounds in a comeback win Saturday against Oklahoma in the Battle 4 Atlantis, but was out for the Ducks’ loss to South Carolina on Sunday.

In the waiting room

Texas A&M (4-0): The Aggies, led by fifth-year guard Kayla Wells‘ 18.5 PPG, will play in the Paradise Jam in the Virgin Islands this week.